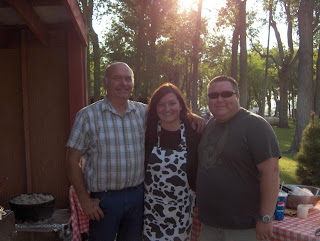 Braving $4.15 gasoline, Aaron and I jumped in the 4-Runner and hit the road last weekend. Our destination: Nat-Soo-Pah (or "Nat-Soo-Crappy" as Aaron more appropriately named it). How did we end up there you might ask? Simple: my dad asked. Every year his ward plans a Super Activity for their youth and it has become a tradition that my Dad will cook Dutch Oven for them. Usually they whitewater raft down the Salmon River (one of my most favorite things to do)... but this year they planned an outing to Nat-Soo-Pah as part of a trip to the Twin Falls Temple Open House. Always open to spending time with my dad (even if it is under duress as a potato peeler) I always answer his sous-chef S.O.S knowing that I'll get a free whitewater rafting trip out of it. This year however, Aaron and I got a free night at Nat-Soo-Pah.
Aaron wasn't too keen on the idea until I started making up lies about why the Shoshone Indians named it Nat-Soo-Pah. That perked his interest. It also helped that we planned to spend the rest of the weekend camping at the Diamond A. Aaron hasn't experienced my grandparent's ranch yet so I figured that since we would be so close, we'd spend a few days on the range where the deer and the antelope play.
In true Wilson fashion...that plan lasted until about 11:00am Saturday morning. Soaking in the hot springs in 100 degree weather will certainly change your mind and that is exactly what happend when my dad and Aaron started talking about scouting out hunting grounds during our "Nat-Soo-Crappy" swim. Good thing I'm spontaneous. My only condition was that we had to hit the Twin Falls Air Show on the way out of town so that I could see the Blue Angels. You can tell by the number of photos I took (slide show below) how much I enjoyed it. Very cool! No wonder my little brother Clay decided that he wanted to be a military pilot after we saw them at an air show when we were little.
After the Air Show we continued northbound toward Carey, Idaho (population 415...which is near Sun Valley for those of you not so familiar with Idaho geography). There we met up with my mom and baby brother Cody for a camping trip up Wood River, my mother's native land. Aaron sumed it up pretty well at the conclusion of my mother's tour. He said, " why did you ever leave this beautiful place?" to which my mother replied..."you've never seen the Diamond A. When you do, you'll understand." At that Aaron said, "okay - I'll give you credit for why you left...but why haven't you come back?" Needless to say, my mom didn't have a good reply.
After two days of driving around the mountains with my dad, Aaron, and Cody....I'll second that option. Mom and Dad: I understand why you left...but why on heaven's green earth haven't you gone back? I can't wait until I retire. I'm going to buy the Rainbow Ranch and raise sheep. There I'll ride my 90 year-old horse Butch across the range and together we'll push them "lil' doggies" towards Sun Valley for the annual Running of the Sheep (inside joke). It will be heaven and I hope that you'll all come visit.
Be sure and stop at Nat-Soo-Pah along the way...

Life Is Tough, But It's Tougher When You're Stupid! 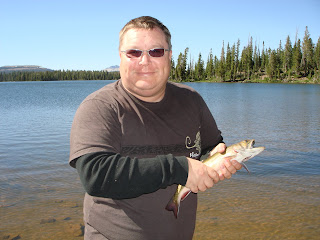 Yesterday Mr. Thompson took Lil'A, Momma Mia and me on a fishing trip into the Uinta Mountains. Fishing you say? Yes, fishing! But first...we had to hike. The hike was really anticipated because Mr. Thompson loves to do it and this was Lil 'A's first conscious hiking trip (she didn't have the luxury of riding in the kiddie backpack this time). She was really excited about it...until we got about 500 yards into the trail and then the "Are we there yet? Are we there yet? Are we there yet?" questioning began. Mr. Thompson entertained her for the mile trek uphill by throwing rocks in to the woods behind her back and pretending it was a bear. In true 6-year old fashion the conversation was really funny.
Two chipmunks, a lot of wildflowers, one hawk, a bag full of "pretty rocks", and a woodpecker later...we made it to Wall Lake...which of course was packed with Boy Scouts. To get away from the crowd we went trekking along the shore across the lake to find the perfect secluded fishing spot. Like the Holy Grail, we found it about 1/2 way around the lake and made fishing camp. Our perfect spot had a really good rock ledge which dropped off into a deeper section - perfect for fishing! I was thinking "hallelujah, no snags along the shallow shore like last time!" (when I spent most of the day retrieving my snagged lures from tree trucks, rocks, etc.)
So we start fishing and it was great. The Boy Scouts were across the lake...nobody was around...Abbi was casting her little heart out with Aaron teaching her how...they got a bite...and I'm relaxed for the first time in 3 months. This is a trip I've been waiting for all summer long! Did I mention that nobody was around? I was in heaven!
At least I was...until HE showed up! I'll admit, I wasn't very concerned when a man wearing a BYU shirt came around the bend with his two sons in tow because I assumed they were just passing through. Like us, the dad was in search for the perfect spot to enjoy a fine Saturday afternoon...and he had a whole lake of shoreline to chose from. Then...he stopped about 5 feet from me and started looking at the water. Then...he proceeded to tell his children that this was were they were going to go skinny dipping. Then...he started to take his shirt off while his children just stood there looking scared because a strange woman (me) was not only within viewing distance but touching distance too. Then....I looked at Mr. Thompson who was shaking his head in equal disbelief as he quickly gathered up his daughter and their fishing gear to leave. Not me though! Nope, I held my ground just casting and reeling...casting and reeling...casting and reeling...thinking to myself "this has to be a joke because surely someone wouldn't be so rude". Surely I was wrong!
I want you to know that I held my tongue for as long as I could because I refused to believe that someone would have the guts to act that rude! I held it as long as I possibly could but when it appeared that this man really was going to try and ruin my day by jumping into the water right next to me....(again - 5 feet. Not even a smart distance from my fishing hook!)...despite a lake that had 3/4 of is shoreline empty....I couldn't take it another minute. My Scottish heritage got the best of me and I said, "Sir, are you really going to swim right next to us as we fish?!" To which he replied "Yes...you found a really good spot here and we are going to swim". For which I replied "Incredible!" At that point, Mr. Thompson departed with Lil'A and their fishing gear for another stretch of shoreline. Not me though. I just cast and reeled...cast and reeled...cast and reeled...and got hotter, and Hotter and HOTTER! Like Mount St. Helena I eventually blew and this is how it played out after he did a cannonball right next to me which got me wet...

Me: It is so good to see that you are wearing your religion on your t-shirt. You might want to take a look at that because it's obvious that "Y" stands for rude!
Idiot: This is where I want to swim.
Me: Sir, you have a whole lake to swim...look around....you could go anywhere else...but you chose the exact spot where someone else is trying to enjoy their day. It is rude beyond compare and I can't believe that someone would be so inconsiderate and selfish! Again, you might want to take a look at what you are wearing on your t-shirt!
Idiot: Who fishes at noon?! This is a good swimming spot.
Me: If you open your eyes and look around... you'll see more people fishing than swimming! Families are trying to have a pleasant day with fathers perhaps teaching their daughters how to fish for the first time. With the exception of you, all of these people are showing some common decency for each other.
Idiot: Well you can fish elsewhere because this spot was meant for swimming.
Me: You know what, we've been here a lot and when we see people swimming here...we fish elsewhere. When people fish here...more considerate people swim elsewhere. That's a concept obviously lost to you so I'll just collect my things and wish you a lovely day! But again, you might want to think twice about wearing that t-shirt....

With that I stomped off to where Mr. Thompson was...cast and reeled....and promptly lost my lure on the same damn debris which I was trying to avoid. My Mr. Thompson just looked at me...smiled...asked me if I was feeling better from my fishing rage (yes I was)... and said, "good - now go get that lure because you lose way too many!"
Thinking back, I probably shouldn't have said what I did in front of children but the Idiot really did get off easy because I was dressed in camouflage and if my sister Becky would have been with me...
The moral of my story is this: as John Wayne said, "Life is tough, but it's tougher when you're stupid!"
Posted by Mr. Thompson and Me at 7:05 AM 2 comments:
Newer Posts Older Posts Home
Subscribe to: Posts (Atom)