Direct quote from The Bachelor. (yeah - I watched it.  Don't judge.)

"Since I was a little girl I've always imagined meeting and marrying my best friend.  Of buying a house with my best friend.  And making babies with my best friend.  And more babies.  And more babies.  And more babies..."
Is it wrong that the jaded part of me cracked up at that and said (with an eye roll), "hold on skinny bikini girl - you're probably 1 in 6"?!
Mr. Thompson was walking through the room at the time and called me a Cynic.  Then he told me that I watch some really stupid stuff on the tele.
I tend to agree but no matter how many times I tried to turn the channel, I couldn't seem to stay away from what will surely end in a nuclear explosion.
What can I say?   I like train wrecks.
As far as the cynic part goes - yeah, I guess I have a dash of that too.  Only because I think that I was once that girl (minus the skinny, bikini part post 1996)
Once upon a time, I vividly remember driving down the interstate with Mr. Thompson before I was his Mrs.... and having "The Talk".  You know be one.
I can tell you the exact mile marker in which we reached negotiation on what our family would look like.  Him.  Me. Three (yes, three) kids.  A dog.  And an SUV (no minivan).
On a happy note:  It's me. Him. A dog.  An SUV.  And The Bachelor, which only proves that after 17 seasons of engagements resulting in an 11% success rate...
I still have hope.
Rose, anyone?! 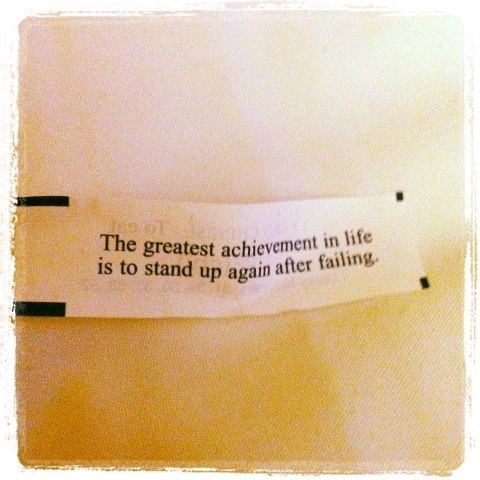 If I can make it here, I'll make it anywhere...

I wish that I had something witty and funny to say. Viva la Vida has been really hum-drum lately and I completely recognize that I need to get my groove back.

It's in there somewhere, of that I am sure, but exactly where I don't know. I haven't seen it for a while. A long-long while. Years actually.

Not gonna lie, y'all know I came here sad and ready to give up. After an incredibly positive and hopeful holiday the end just sort of hit me. Reality's slap felt particularly vicious after such a personal high...but life goes on.

Except that I wasn't ready for life to just go on.

I thought that three (now six) weeks in NYC would be a cure all. Instead of thinking about life's little disappointments I could forget myself and go to work. I'd find sanctuary in doing what makes me happy, in the place that makes me the happiest (thank you 20's!).

Slowly but surely, that theory may be working.

Mr Thompson surprised me last weekend and it felt like a honeymoon. Cheesy, I know but if you've been through infertility treatments...you get it. Boy, do you get it!

After six+ years of so much drama, It was nice to just have some plain old fashioned romance. No calendars. No shots. No science. No pressure. Just pure relaxation and intimacy without expectations. I was reminded how important spontaneity is in a relationship - even the best of relationships.

As we cuddled in bed I told my Mr. that I want to get my groove back. He told me to go shopping. Get my hair cut. Paint my toenails.

He's right and so by the time I return home in a few weeks, I vow that I'm going to do every one of those things.

I'm also going to put some things behind me. I had a really therapeutic conversation with someone at work. Our conversation was about PTSD and I had a few Oprah "ah-ha" moments. I've secretly never really believed in PTSD and certainly never thought that it applied to me (crazy in my profession - I know) ... but after this conversation I also recognize that it's not normal to look down and see a finger on the ground (thank you 9/11), or see someone get electrocuted to death (thank you Hurricane Katrina)...or to even lose a 24-week old baby in a bathroom toilet because you don't know labor pains.

Probably way too much personal information, but there - I finally said it.

So yeah, I had a healing conversation about PTSD and recognize that there may be some truth there. Sometimes things can hurt your soul in incomprehensible and lasting ways.

Luckily, I have a little more time to do that on my own in NYC. I'm working my buns off...but at night I get to take long walks and eventually look out my hotel window onto the craziness of Times Square below. Every night I get to laugh at "The Statue of Liberty" as s/he tries to navigate rain, sleet, people, and now snow on 15 foot stilts. Night after night s/he is on those stilts making me laugh. If that doesn't teach you about hope during challenges, I don't know what does.

In the words of wise ol' Frank Sinatra...

If I can make it there
I'll make it anywhere
It's up to you
New York, New York
Posted by Mr. Thompson and Me at 11:17 AM No comments:

Last weekend Mr Thompson wanted to take me to Ground.Zero. I haven't been back to that site since 2004, and in all of his wisdom, he thought it was time.

Last year I said no.

So we made the trek to lower Manhattan on my day off. As we came out of the subway station at Courtlandt Street (R train), I could feel it building - this sadness that I always feel in my chest at memories. All the sad people whose burdens became my own during the years of 9/11 response and recovery.

As we walked toward the 9/11.Memorial where the Twin Towers once stood, I was somber. I thought about working with first responders at the Respite Center during the days and weeks following the attacks. I thought about the van ride that took me to the building across the street for the first time - the overwhelming immensity of "The Pile" and that smell that will never really go away. A strange mixture that resembled rotten eggs and burning breaks.

Last weekend as I walked towards the memorial down (relatively) clean and newly paved streets... I couldn't help but think of the ash which once coated everything, everywhere. Of seeing it - tasting it. Everywhere.

Last weekend as I handed over my ticket at the memorial entrance...I couldn't help but remember showing my badge time, after time, after time, again. To men with guns at barricades, fences and doors. And being extremely grateful for all of the ID checks because it felt a little more safe when everything else felt very unsafe.

Last weekend as I took off my hat, gloves, and jacket to pass through the memorial security checkpoint...I couldn't help but remember having to have my boots washed at the entrance of the Respite Center. Decontamination.

Last weekend as I walked past the fences and into that new space of a 9/11 Memorial... I couldn't help but think about how it has all transformed since the last time I was there. I stopped. I stared. In unexpected...awe?

Mr. Thompson tugged my hand forward and we walked on.

... and as we walked on and into that transformed space, I couldn't help but think about the contrast as I last walked there with a few of the families who went there for the first time in the months and years that followed. Of meeting them at Pier94, the Family Assistance Center, where we began Recovery casework. Of the time we gathered in that place near the Statue of Liberty where some families received a red box with ashes from Ground Zero - to represent a body that was never found or identified.

My Mister. He is a good man because out of love, he silently walked me around the two base memorials which outlined the perimeters of the buildings. He knew what I could expect because he went there last year without me. He walked me up to the edge of what once became a crater and as we looked down on the symbolic waterfalls below, he put his arm around me and squeezed.

I looked down on the granite railing and realized that it was inscribed with the names of the fallen. All of them.

The first named I looked down upon was of Peter.Ganci, Jr. Peter was the FDNY Chief and Incident Commander. I was startled at the irony of that being the first name I saw and couldn't help but reach out, touching his name in respect. I never knew him but his leadership has always been something I've admired.

I eventually wandered down the railing of the South Tower...looking for Tim.Welty. Squad 288. I found him and I couldn't help but reach out again. In affection.

I walked further and tried to remember names. I failed a lot. The Asian kid whose parents pretended he was still alive for 7 months. The fiancé of a man I advocated rights for. The husband of the grieving widow who ultimately took her own life.

It really bothered me that I couldn't remember complete names of the family members I once served.

My Mister. He sat on a bench and patiently let me try. I walked the perimeters. Twice. And despite my original anxiety of the whole experience, I did feel a little of that something that I was afraid of. I don't know if it's good or bad, but it was there. It cracked me as I started to realize the repetition that I was reading as I traveled and touched the granite.

Pregnant women whose names were written with "and her unborn child".

It struck a different cord, in a different way and made me cry. Somehow, someway...there has got to be more love and less hate in this world.

Let it begin with me. 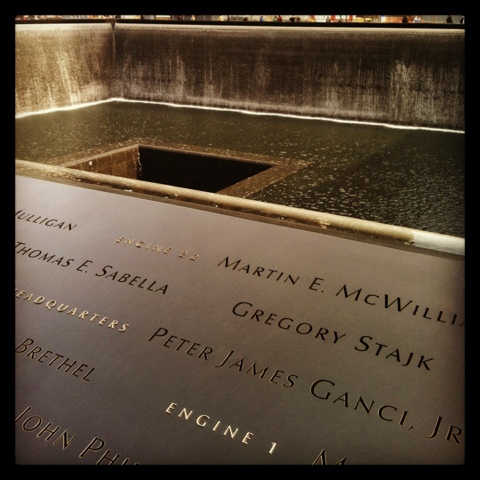 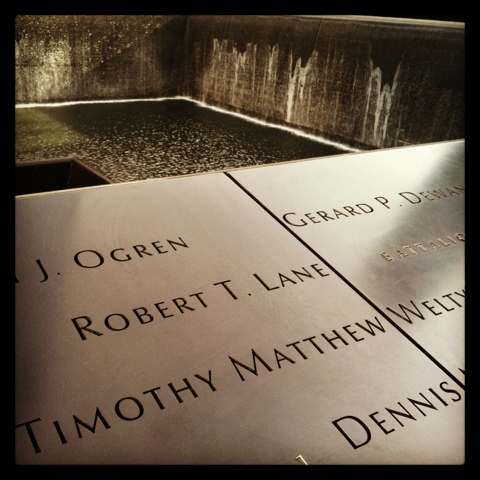 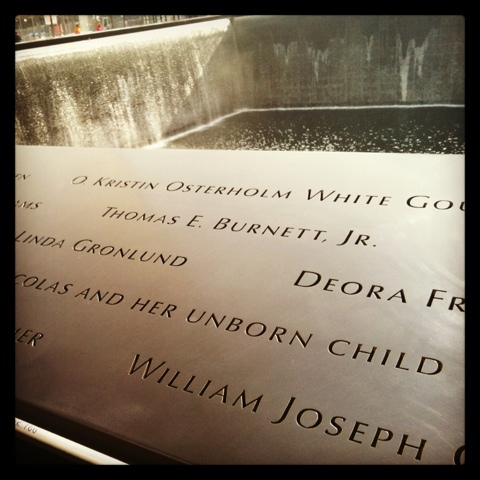 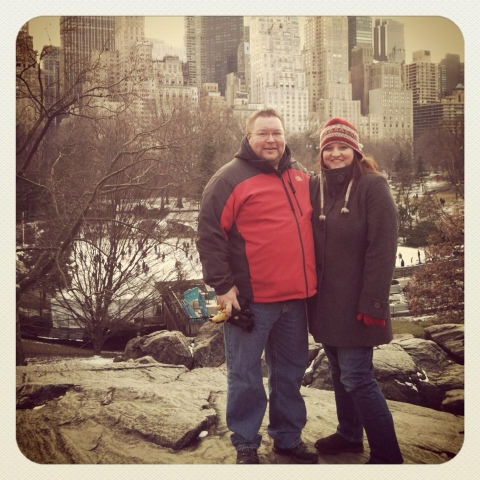 I love that when I feel low... something or someone inevitably happens to make me feel high again.

I have an amazing circle.

With the most amazing champion.

Last night my phone rang at about 6:30p and it was Mr. Thompson calling to check on me. He knows that I've been working really hard and was calling to tell me that he thought I should cut out "early" and head "home". ("Early" being a 13 hour day instead of the usual 16 ... "Home" being a hotel room).

On the eve of my first day off in three weeks I agreed and started to wrap things up about 30 minutes later. It was another long but a good day on the Hurricane Sandy disaster relief operation. My 147 caseworkers are kicking butt getting rent/rebuild assistance out and it finally feels like clients are finding affordable housing options despite a serious housing shortage in NYC. Things are moving along.

Those were my thoughts as I walked out the office doors for my walk down 49th Street. I rounded the corner and stopped dead in my tracks in stunned disbelief...

Standing next to a pillar.

Patiently waiting despite the bitter cold.

Only my Mr. Thompson would hop on a red-eye flight to travel 3,000 miles for a kiss, a hug and a simple "I love you".

He is my biggest champion and I am incredibly lucky to have him help me through the ups and downs of our journey called "life".

(a close 5999th is the fact that he'll buy tickets to "Evita" tonight just so I can see Ricky Martin on Broadway!)

All is well. Again. 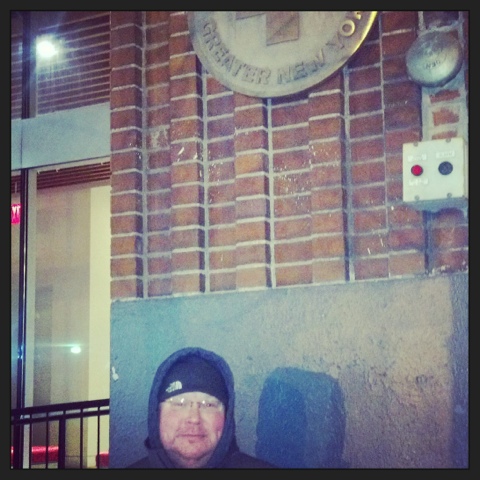 Posted by Mr. Thompson and Me at 8:13 AM 4 comments:
Newer Posts Older Posts Home
Subscribe to: Posts (Atom)