The Plea. And His Answer.

Confession: I’ve been on the run.

Until one day, he suddenly stopped and realized he didn’t have to run anymore.

And that's been me.

Just after getting the call from the nurse on March 14th, Mr. Thompson pleaded with me to lay down on the bed with him.  I told him that I couldn't because I knew that I was going to shatter into a million tiny little pieces. If anything, I don't like to shatter... so I made a few quick notifications, turned off my phone, and went to work (on a day off). And when I was done working, I packed my bags. Then I went to Sam’s house to watch her kids for four days while she spent some much needed time with her husband.  It was pre-planned trip that we were all really excited about after all that they had done for us.  Sam wanted to send the kids somewhere else after the disappointing call, but I was insistent that we stay on course. Truthfully, it was a really good diversion for Mr. Thompson and me.  We had a really great time, but yeah... I was totally running.

A few days in, on a quiet Sunday morning, I put the kids in the car to go to my house to be with Mr. Thompson for the afternoon.  The kids were still drowsy from a very tiring day before, so all was quiet.  When I started the car, a song immediately came on the radio from the beginning chord, which hit the deepest part of me.  It was a song that my older sister shared with Mr. Thompson about a month earlier, bringing him to tears.  As she played it for him, she told him that it reminded her about the glorious day that he'd see Colton again - our little boy who sometimes feels so far away in our fragile faith.

This Sunday morning however, the words changed and the song became mine.  It became my very personal plea to God in a moment of desperate confusion. I had struggled to find words for many days, and I finally found them. So with drowsy kids in the back seat, tears fell the whole way home as I listened to Fall On Me (click to hear), by Andrea Bocelli and his son Matteo.

The first part is sung by Matteo as a plea to his father.  And I felt that.  Deeply.

But when Andrea started singing a reply back to his son in Italian... it struck me more profoundly as the voice of God.  He's speaking to me and it sums up our relationship perfectly.  I know God is there.  I know He hears me and I know that I hear him. I know He is responding back to me on every question and plea that I have ever had.  I know because I know His voice - His beautiful tone - and the feelings that I feel when I hear Him.

But for the life of me, as beautiful as His voice and the music around him is... I still can't understand it.

I understand that He replies to me with complete love and affection because I feel it and I hear it.  But I don't know what He is trying to say because I'm not yet fluent in His language. Here and there, I'll pick up a few words that I think are familiar.  Words like "Ascoitami" (listen to me) and "Abbracciami" (embrace me).... but I don't understand everything that He's trying to tell to me. I try, and I try, and I try.  But I'm lacking in my experience and just can't seem to overcome the language barrier between us no matter how hard I try.  Simply put, I don't speak Italian.

And that sums up this experience for me perfectly.

Surrogacy wasn't just about "a pea" and "a pod".  Matter of fact, it wasn't about that at all.  It was about Mrs. Thompson and the true mission that God has for her in this life. The pea and the pod were just a means to get there. So in the last 2.5 weeks, I've listened to this song a million times as I've been running from one place to another. Down the road - from my house to Sam's.  Across town - from Sam's house to the airport.  Across the state - to Phoenix. From Phoenix to Flagstaff. From Flagstaff to Albuquerque. From Albuquerque to Santa Fe. From Santa Fe to El Paso. From El Paso to Tucson. From Tucson back to Phoenix.  From Phoenix to Dallas. From Dallas to Mexico City. Running. Running. Running.

But today in Mexico, like Forest Gump ... I just stopped.

It happened in the strangest place - Benito Juárez International Airport in Mexico City.  I was quietly sitting at my gate two hours early, watching people in their hustle and bustle.  Everyone hurrying somewhere on their own run. I was admiring the airport's fascinating architecture with all the small round holes - floor to ceiling - which let in a really beautiful natural light.  It created small light beams all around me, especially on a really sunny day like today.  It was glorious.  So as I enjoyed sitting in the moment, I decided to put in my headphones.  I clicked the first thing that came up on Pandora which happened to be the Andrea Bocelli station.

And that's when something marvelous happened. Fall on Me started playing again from the very first chord...

And in that moment, with the literal "lights up above, coming down in circles and guiding me to love"... I was staring up at the beams of light when the most joyous feeling of love and peace washed over me. And as I was looking up... I expected a beautiful response to a child's plea to come to me again in Italian... 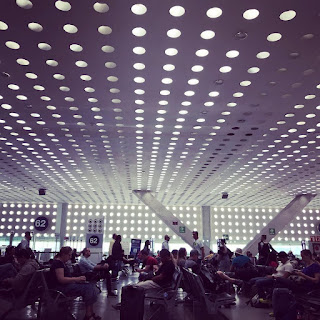 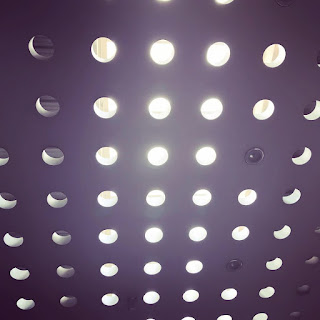 Only this time, God's response came in perfect English. Fall on Me (English version, click to listen)

Soon you will find what your heart wants to know
Don’t give up hope for I know you are close
And all you have ever dreamed, wished you could ever be
Is waiting to find you wherever you go
Believe in yourself, every step that you take
Know I am smiling with pride everyday
My love will forever be, stronger than stone
Don’t be afraid you are never alone...

When the song ended, I turned off my headphones and sat staring in silence, looking at those circles of light for a really long time. I wanted to memorize this moment for the rest of my life as the moment when I most fully felt God's goodness and grace.  I kept the earphones in and enjoyed the sounds of silence and feeling of light for almost two hours. When the time was right, I calmly walked to my gate, got on my plane, flew home, drove from the airport, walked through the front door...

And finally laid down with my husband.

When that nurse called me on March 14th and blurted the news, the thought that immediately raced through my mind was "Lessons".  Even before the call ended... over and over and over... I just kept repeating that word.  "Lessons. Lessons. Lessons." as if I was reaching for something.  I was looking for an answer but I couldn't immediately find it. The entire experience utterly confused me because for as long as I live, I will never deny the thoughts, impressions, feelings and personal miracles that I've felt all along the way. I know the source from which all that goodness came, but the result wasn't what I expected.

And then I got up off my porch and took off.  Aside from being away from my Mister, it wasn't totally unhealthy because in detaching and "powering through", I was able to forget myself and go to work.  As I did that, I had some really good quiet moments in hotels along the way.  But unfortunately, my initial confusion became a persistent doubt in myself and in my ability to feel like I really heard God's true reply in all of those thoughts, impressions, feelings and miracles along the way.

Siting in that airport, I finally realized that I did.  I did hear Him.

And it's all going to all be okay.
Posted by Mr. Thompson and Me at 11:00 PM 3 comments:
Newer Posts Older Posts Home
Subscribe to: Posts (Atom)